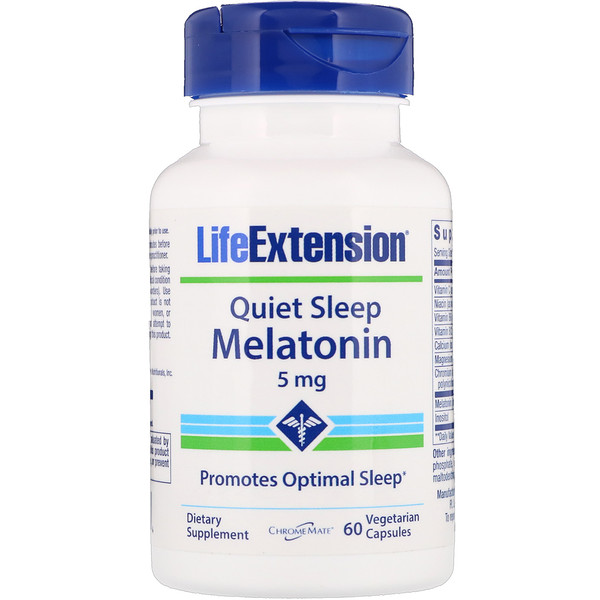 Melatonin increases the speed of falling asleep and adds to the quality of sleep. It also has a strong antioxidant property and is important for protecting cellular DNA.

Benefits at a Glance

Melatonin is a derivative of the amino acid tryptophan. In humans, melatonin is primarily synthesized in the pineal gland and is released mostly at night to make falling asleep easier and improve the quality of sleep. In addition to sleep, melatonin has a strong antioxidant property and has been shown to support many other aspects of health such as immune and brain function.

Melatonin is a hormone that is necessary for keeping our circadian rhythm in tune. Many people experience difficulty falling asleep and staying asleep. These issues occur because the secretion of melatonin declines with age, causing many of our biological functions to become impaired. Furthermore, melatonin release can also be affected by jet lag, shift work, and poor vision. A good night's sleep is crucial for overall energy and well-being, so melatonin is important for everyone!

The Antioxidant Properties of Melatonin

Melatonin also has strong antioxidant properties. It directly scavenges both hydroxyl and peroxyl free radicals, and it does so more effectively than most other antioxidants. It also greatly potentiates the efficiency of other endogenous and exogenous antioxidants. Melatonin is especially important for protecting cellular DNA against peroxynitrite damage by inhibiting peroxynitrite free radical reactions. And melatonin has been found to be superior to glutathione-3 as well as vitamins C and E in reducing oxidative damage.

Melatonin has a beneficial impact on the immune system—it activates T-helper cells to trigger other immune cells in order to boost immune response to foreign molecules.

Support your Brain with Melatonin

The cognitive decline that occurs as we age may be directly related to the drop in melatonin. Melatonin supplementation can help support the brain's antioxidant defenses and potentially inhibit the factors that can lead to cognitive decline. Don't let your health decline—support optimal sleep and well-being by being proactive and stocking up on melatonin today!

Read the entire label and follow the directions carefully prior to use.

Take one (1) capsule 30-60 minutes before bedtime, or as recommended by a healthcare practitioner.

Caution: Consult your healthcare provider before taking this product if you are being treated for a medical condition (especially autoimmune or depressive disorders). Use caution if combining with alcohol. This product is not intended for children, pregnant or lactating women, or women trying to become pregnant. Do not attempt to drive or operate heavy machinery after taking this product.